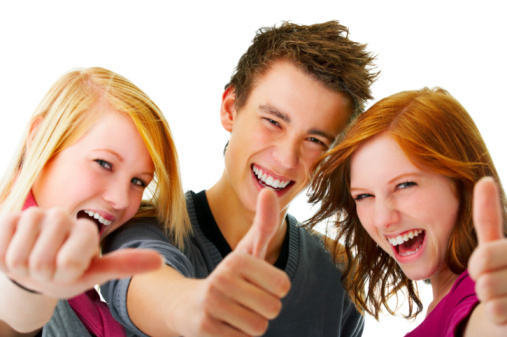 It’s good to consider why you’re doing all this, and your answer to this question can impact your college search. If you answer, “Because I want to be a journalist,” it makes sense to look at schools that offer a journalism major. If it’s, “Because I’ve lived in the same gated community my entire life and want to experience something different,” you’ll want to pay attention to where the schools are located and the diversity of their student populations.

2. Do you think you’re ready to go to college?

There’s no shame in feeling nervous, academically unprepared or just unsure of yourself when it comes to college. But I’ve seen students who, instead of just being honest about their doubts, dragged their feet through the entire application process, leaving their parents to (resentfully) do all the work for them. If you have similar concerns, first, be honest about it with yourself and your parents. Second, apply to at least a few colleges anyway. You apply in the fall of your senior year but you don’t actually decide where— or if—you’re going to go to college until the end of your senior year. If you’re still not ready to go then, you could consider other options; but a lot can change in those six to eight months. Refusing to even apply just takes options off the table that are hard to get back later.

3. How have you done your best learning?

We like this question better than, “Do you want small classes or big classes?” The right colleges should give you lots of opportunities to love what you’re learning and how you’re learning it. So think about the times in high school where you were at your intellectual best. Not just the times when you got the highest grades, but when you were excited about what you were learning. Was it a particular subject? Was it because the teacher was great? Was it because it involved projects, competition with other students or a lot of class discussions? Or maybe it was something that didn’t even happen in school, but you just took the time to learn it on your own? Your answers to this question can tell you a lot about what you might like to study, whether or not it’s important that you like the teacher, and how much academic freedom you’ll want to take classes you want to take.

“What do you want to major in?” is a big question a lot of my students aren’t yet ready to answer. “What would you like to learn more about?” is less committal. It lets you consider how much you like math without necessarily deciding that you’ll major in math yet. College is school, after all. It’s important to consider the learning part of your future four years.

5. How hard do want to work academically?

Some schools are a lot more demanding than others. I’ve met students who say they want to go to Cornell but don’t want to take four A.P.s their senior year of high school because of the workload. Those students shouldn’t apply to the school with a reputation as the hardest Ivy to get out of.

We don’t think you’re a bad kid if you admit you don’t want to overdo the academic intensity in college, but it’s worth considering before you pick your schools. When researching schools, pay attention to what the students say about their experiences. Students at MIT, Carnegie Mellon, University of Chicago, and Middlebury will bring up how much they study. It’s like a badge of honor. Swarthmore College even prints T shirts that read, “Anywhere else it would have been an A…really.” That’s a clue.

6. Do you have any idea what you want to do with your life?

We haven’t met many successful adults who discovered their career paths when they were 17, so I don’t think it’s a problem if you can’t yet answer this question. But if you already have a future career in mind, it should probably be a key criterion to consider when picking colleges. Do a little career research and find out where people successful in the field went to college and what they studied. You might be surprised by what you find. For example, Google and Apple employ more graduates from San Jose State than they do from Berkeley, UCLA, or MIT.

We think this is a fun question because it’s not necessarily the same as “What activities do you want to do in college?” The answers to this one draw out everything from the types of students you want to be around to where the campus is located to what you want to major in. When we ask our Collegewise students, we get answers like, “Playing video games with my new friends in the dorms,” “Talking politics in the coffee shop,” “Heading into the city to do something fun,” “Building a working robot with the other engineers,” and “Going to the big football game.” This question also gets at just how comfortable you are with the idea of students drinking and doing other things they may not tell their parents about. With some notable exceptions, like the military academies and strict religious affiliated colleges, a certain percentage of kids at every school are going to find a way to have their good ol’ college fun. Just how prevalent do you want that kind of fun to be? You’re only in class for a couple hours a day at most in college. The rest of the time, you’re living your life on (or off) campus with your fellow students. Think about what you’d like to be doing in your free time and look for where that will be possible (See “50 Things You Can Do in College” if you need help brainstorming).

8. Do you want to go to college in a place that’s different or similar to where you live now?

This one hits on everything from your city and state, to the size of your town, to the type of people in your community. College can be a four year opportunity to live in a different place very different from where you live now. But that’s not the right opportunity for everyone. It’s good to consider just how much change you want to take on when you go to college. One of our former Collegewise students said he wanted to be someplace very different because, “I’ve lived in the same gated community my entire life and gone to school with the same group of kids since I was five.” When he later applied to college, he mentioned that need for change in a lot of his “Why do you want to attend this college?” essays. One of those essays began, “I have never met anyone from Arkansas, and I think it’s about time that I do.”

9. Do you want to be with students who are like you or different from you?

Differences can come in lots of forms, like ethnicity, sexual orientation, where people are from, their religious beliefs (or lack of them), their politics, whether or not they drink or use drugs, etc. Some colleges are a lot more diverse than others, and it’s a good idea to consider whether or not you want to be with people who may be very different from you. A popular college application essay question asks you to describe how you’ll contribute to the diversity of the campus community. Schools that ask that question tend to be proud of their diverse student population and look for students who want to become a part of it.

First, talk to your parents and get a sense for how much they can afford to help send you to college. It’s normal for some parents to be reluctant to discuss finances with their kids, but you can’t do a responsible college search without knowing your family’s financial limits. If your parents are uncomfortable discussing it, ask them to share the budget in “round numbers.” That feels a little less financially invasive.

Second, don’t automatically eliminate any college that’s over your family’s budget. You won’t know the amount of any potential financial aid package until you are actually admitted. You can estimate it through colleges’ Net Price Calculators, but the package could later be influenced by other factors, like your strength as an applicant. It would never be a good idea to apply to a long list of schools your family couldn’t possibly afford. But don’t cross every school off your list that exceeds your family’s budget, either.

Kevin McMullin Kevin McMullin is the Founder of Collegewise, a national college admissions counseling company, co-founder of The Princeton Review and the author of If the U Fits: Expert Advice on Finding the Right College and Getting Accepted. He also writes a daily college admissions blog, wiselikeus.com, and has given over 500 presentations to discuss smarter, saner college planning.
Related Content