Home article 3 Facts About Sororites and Their Member Recruitment Process 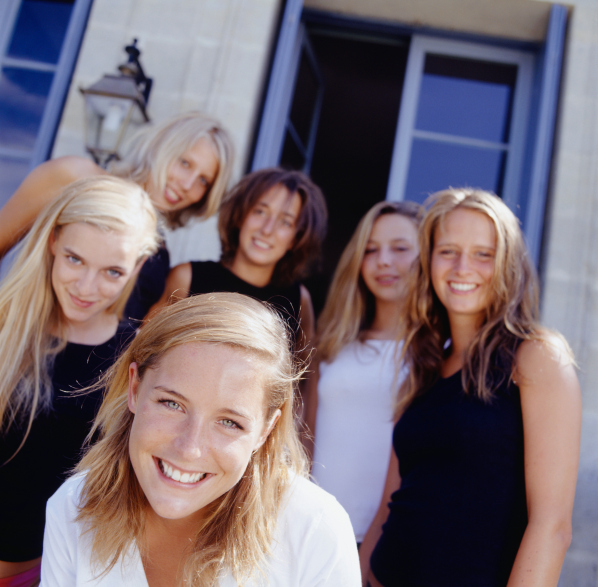 The word “Panhellenic” (pan-huh-len-ic) is formed from two Greek words, “pan” meaning “all” and “Hellenic” meaning “Greek.” When you hear the word Panhellenic in reference to a college council, an alumnae association, or a national conference, you want to think “all sororities.” The National Panhellenic Conference (NPC) is the body of 26 women’s fraternities established to support the collegiate chapters of the NPC member groups.

Wait, did you say fraternities?

Are Rush and Recruitment the same thing?

The term “rush” was coined around the turn of the 20th century when sorority and fraternity students would physically rush train platforms where new students arrived on campus for the school year.

That was the beginning of the disorganized membership recruitment for the sororities and fraternities.  In the 1920s, the National Panhellenic Conference (NPC) implemented a Preferential Bidding System for sorority recruitment, thereby ending the “rush” of sorority and fraternity members to those train platforms.

In the late 1990s, Panhellenic groups began changing the terminology for this process to more closely match the true process at hand: membership recruitment. Your student’s campus may call it either recruitment or rush, and you might hear both terms used interchangeably. It might be easiest if you consider “recruitment” to be the formal name and “rush” to be the informal name.

What do I need to know about alcohol and hazing during sorority recruitment?

Many prospective sorority members and their parents worry about sororities engaging in questionable practices which may culminate in alcohol use and/or hazing during sorority recruitment week.

Your formal Panhellenic sorority recruitment process is structured and overseen by mature student leaders such as Panhellenic officers, recruitment counselors/guides, and sorority officers. Additionally, student affairs professionals and (inter)national officers of many sororities are present. Alumnae and advisory board members, many of whom are parents themselves, are often present at each sorority to assist with management or support of the events.

Concerns about alcohol may stem from the use of the word “parties” on some campuses. Think more along the lines of a proper British tea party rather than a raging bash with loud music and drunk students.

In fact, sororities plan their tea-party-like events in detail months in advance, knowing which sister will be where and what she will be doing what at any given minute of each party. They plan these details intricately so their time spent with the prospective sister will not be interrupted.  The goal is to create the best possible opportunity for the sorority members and your student to get to know one another.

Obviously alcohol would interfere with getting to know a potential member on a genuine level and it’s consumption is therefore not encouraged by sorority members. But also, alcohol is not permitted on sorority properties.  It is expressly prohibited by local, institutional, and (inter)national organizations during sorority recruitment events – not to mention the fact that few women involved in the recruitment process are of legal drinking age.

Hazing is expressly prohibited during sorority recruitment, and at all other times as well. Hazing is not a “sport” as you might have seen portrayed in the media or in movies. It is a shameful activity and those who participate in such activities are penalized and often ostracized. Be sure to read your campuses statement on hazing if you have further concerns.

Alcohol consumption and hazing during formal Panhellenic sorority recruitment are not activities that sorority members condone. The biggest hazing or drinking challenges your student  will face during sorority recruitment will be seeing through the haze of emotions and drinking too much of the gossip.

Sunday Tollefson Sunday Tollefson is an author, professional speaker, coach, and a leading authority on sorority recruitment. She is the author of RUSH RIGHT: Reveal Your Best YOU During Sorority Recruitment and the founder of SureSister.com.
Related Content